Recyclable Materials?
Once your End Of Life Vehicle has been picked up by GreenVehicleDisposal.com and all hazardous fluids and materials have been removed, reusable parts are removed and the remainder is recycled. See below for information on what happens to the various material component parts of vehicles.

Breakdown of materials:
The composition of the car has changed considerably in recent years. The major reason for this is due to the fact that the concentration of ferrous metals has declined considerably as vehicle producers have opted for the lighter, more fuel efficient materials such as plastic when designing new vehicles. The following graph shows the average breakdown of materials found in cars in 1998. 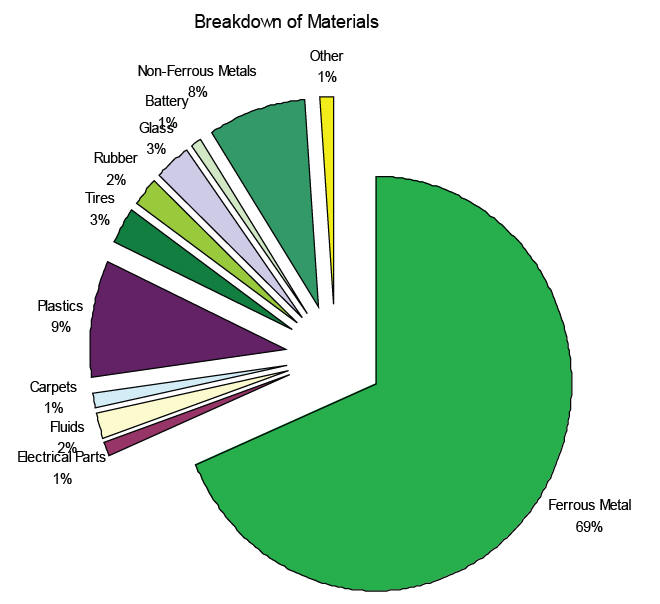 Metals:
Around 76% of the average car, by weight, is made up of metal. Most of this percentage is sheet metal. The overall metal content, however, has declined in the past few decades due to the introduction of non-ferrous metals and plastics incorporated into vehicle design. Of metals used presently in vehicles, approximately 98% is recycled and recovered by shredding operations which is then developed by the steel industry and re- smelting facilities.

Aluminum:
The aluminum use in vehicles is expected to double within the next decade. As with many other sectors within the automotive industry, the aluminum industry is committed to the “sustainable management” of collecting and recycling aluminum from End Of Life Vehicles.

FACT: The aluminum industry gives a continuous investment to research and development, concentrating on new ways to improve recycling procedures.

Support of the End Of Life Vehicle proposal:

The Aluminum Industry actively pursues measures to increase the recycling of End Of Life Vehicles and their component parts.

Plastics:
As stated, the percentage of plastics used in vehicle production has risen considerably in recent years. Roughly, 11% of cars today are made up of plastics. This change occurred for reasons which include the fact that they are both impact and corrosion resistant, as well as low weight and low cost. One of the most defining features of the use of plastics in vehicle production involves the fact that it is cost efficient on fuel and energy sources.

Therefore, the heavier the vehicle, the more fuel it consumes which is why many producers are opting for an increased plastics content in their vehicles.

Although the proportion of plastics used in vehicle production has increased in recent years, the proportion of plastics recovered and recycled from End Of Life Vehicles has not. What inhibits this from occurring is the number of polymers used. This, however, does not really present the problem, it is the fact that the type of polymers used are not stated. If all plastics were readily identified based on what polymer type used, the recyclability of plastics used would increase tremendously.

FACT: In 1998, battery cases accounted for 5,000 of the 14,000 tons of automotive plastics recovered and recycled. However, it is estimated that
121,000 tons of plastics are currently land filled.

Vehicle operating fluids:
The inappropriate treatment of fluids is of utmost concern as far as operating fluids are concerned. Although more and more amounts of engine oil, for example, is being recovered and recycled, less than one third of waste oil is recycled by a vehicle repair person working on private vehicles. Of all vehicle-operating fluids, the one with the greatest pollution potential is lubricating oil.

FACT: Waste oil from almost million oil changes in the UK is currently not collected. Had this oil been collected, it could have met the annual energy requirements of 1.5 million people.

Glass:
Glass constitutes approximately 3% of a vehicles weight that translates into thousands of tons worth of vehicle glass that was available for recycling. There are two types of glass in the automotive industry; toughened and laminated. Toughened glass is relatively easy to remove from vehicles, laminated glass, on the other hand, needs to be removed manually, which is time consuming. Therefore many auto recyclers do not remove glass due to its lack of cost-efficiency.

Tires:
Tires account for 3.5% of the average weight of an End Of Life Vehicle. Many different processes may be used to recycle tires that include:

There are many various tire disposal options, these include: